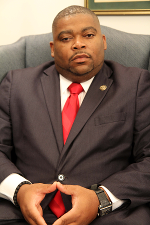 Andre Truth McDavid is originally from St. Louis, Missouri. After serving in the U.S Army in support of the Dayton Peace Agreement, he earned his Bachelor of Arts in Philosophy of Law with a concentration in Morality from North Carolina State University. During his undergraduate years he focused on Friedrich Nietzsche's "master-slave" concept, which he examined in a thesis, "The stand-Alone Complex." In addition to law, he maintains abiding interests in ethics, morality, and political theory. He went on to earn his Juris Doctorate from North Carolina Central University School of Law.

Mr. McDavid aspires to impact the lives North Carolinians, not only through his legal advocacy, but also teaching, mentoring, writing, and public service. His community involvement includes judging Mock Trial competitions. In his spare time he enjoys traveling, comedy shows, a good noodle restaurant, and spending time with his son.

"In the moment when I truly understand my enemy, understand him well enough to defeat him, then in that very moment I also love him." Ender Wiggins.

From the Novel Ender's Game written by Orson Scott Card

CONFIDENTIALITY NOTICE: This e-mail message, including any attachments, is for the sole use of the intended recipient(s) and may contain confidential and privileged information. Any unauthorized review, use or disclosure or distribution is prohibited. If you are not the intended recipient, please contact the sender immediately and destroy all copies of the original message

Pursuant to the requirements of the Internal Revenue Service Circular 230, we inform you that, to the extent any advice relating to a Federal tax issue is contained in this communication, including in any attachments, it was not written or intended to be used, and cannot be used, for the purpose of (a) avoiding any tax related penalties that may be imposed on you or any other person under the Internal Revenue Code, or (b) promoting, marketing or recommending to another person any transaction or matter addressed in this communication.